The X-Structure; the Living Being and the Organism

– The X-Structure – X0 and the Triune Operating Principle X1, X2, X3 – the Basic Nature of Life and Reality –

This elementary overview (symbol/diagram and text) presents only the different main levels of the X-Structure including some special terms given by Martinus and/or Per Bruus-Jensen. Please note that the symbol/diagram does not include details.

We also refer to “The X-Structure” (describes the X0-nature and the Triplementary Principle X1, X2, X3), Symbol/Diagram “The X-Structure (Xom3)” and “Supplementary Information to Ontological Presentations and Symbols/Diagrams (Xom3)”, (includes background perspectives and further developments with comparative and explanatory text, special terms, classifications, references to Martinus’ concepts and terminology, different translations of designations and terms, etc).

Introduction to the Symbol/Diagram

INTRODUCTION to the Symbol/Diagram Xom3

The X-Structure demonstrates that life and consciousness are independent of the physical body, and “to die” just means a transition from physical life to a paraphysical continuation of life. The X-Structure also describes the process of reincarnation and explains past-life memories, near-death experiences, after-death communication etc.

The X-Structure – The Three “Organic” Levels: A. Physical, B. Semiphysical, C. Paraphysical
– and The Creation of Qualia/X3 Subj.; Perception X-RCT Process* supplement follows below the “Perception  X-RCT Process diagram”.

The symbolic illustration of the X-Structure below by Per Bruus-Jensen and NCP X-AIONS also describes the three “organic” levels of the living being and the activity of perception – the creation of qualia.

B. Semiphyscial level: The Switching Body – Temporary status
The switching body (transition and transformation zone and organic link between the temporary physical body and the immortal/eternal paraphysical body). The switching body structure is connected to the eternal body as well as to the physical brain structure, and functions as a paraphysical extension of the brain.
The results/products of the physical processes are moving on to the switching body, transformation processes continue here in preparation for the next level.
(According to Per Bruus-Jensen this semiphysical structure/switching body might be observed and “registered” in the future by traditional science.)

C. Paraphysical level: The Eternal Body – Eternal, autonomous status
Transformed objective impulses reach the eternal body and the primary transformation and perception processes take place in this immortal paraphysical structure and are independent of the physical organism. The paraphysical organism is very extensive, comprising an extremely complex organic system including e.g. the “talent cores”/ “ability-nucs” and the ”perception archive”. The information stored in the so-called memory-talent cores gives “resonance” to new incoming objective impulses and influences how we transform, interpret and act on stimuli, i.e. the transformation of objective reality into personal subjective reality, (the bidirectional “Reality-Consciousness Transformation Process”, X-RCT).
It should be emphasized that it is especially at this paraphysical level that objective reality (X3 Obj.) is transformed into qualia (X3 Subj.), i.e.: immaterial phenomena only existing for the subject/the “I” (X1).
(This level cannot be explored by traditional science, it can only be described by cosmic science primarily based on intuition.) 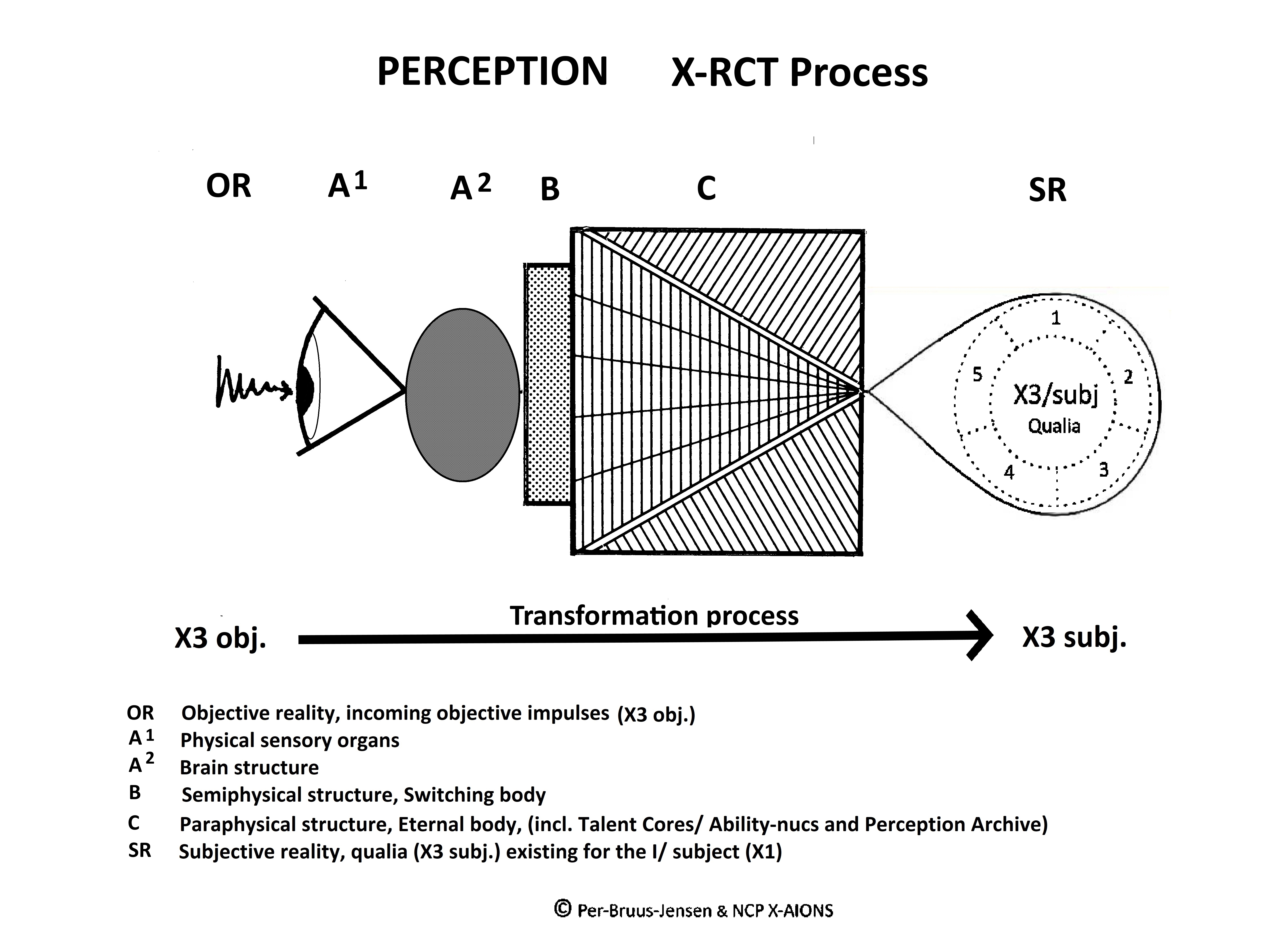 The X-Structure – the Living Being and the Organism (Xom3) – Overview

(a) X0 the Initial Reality with its Central Need/CN and Infinite Potential – the primordial domain of existence, the ”unmanifested”, (emptiness, stillness), (white).

(b) X1 the Subject/ the “I” with its initiating and driving Primordial Urge/PU – the eternal (emptiness, stillness), (white).

Note: Areas c and d are in principle the same for all life-units/forms of life with the exception of the following which are individual: 1. the memory-talent cores, 2. the organ-talent cores, 3. the perception archive, 4. the paragenetic force field. These (1-4) in interaction with the cosmic creative principles are crucial for individuality in areas e-i; the soul structure, the semiphysical switching body, the physical body, the created and consciousness.

(f) X2/X3 the temporary Switching Body (grey) functions as a transition and transformation zone and organic link between the temporary Physical Body and the paraphysical Eternal Body.

(g) X2/X3 the temporary Physical Body, symbolized by the most dominant Basic Energies in physical organisms (orange and yellow), – and in the Physical Planes of Existence, we know as the Mineral Kingdom (indigo), the Plant Kingdom (red), the Animal Kingdom which includes humans at the current stage of development (orange) and also the very early stage of the Human Kingdom (fully developed human beings, “real humans” – yellow).

The Created and Experienced – Objective and Subjective Reality (h-i)