NEW COSMIC PARADIGM
NCP X-AIONS & The X-Research Project
Present
The COSMIC WORLDVIEW and The X-Structure
The Nature of LIFE and REALITY – Ontology of CONSCIOUSNESS and EVOLUTION
***
The X-Structure in Martinus Cosmology represents the Analysis of Life – the Basic Nature of Life and Existence. “X” – the Structure of Life and Immortality, Our Eternal Evolution and How we Survive Death. The X-Structure elucidates our Immortal Paraphysical Body Structure, which Exists and Operates totally Independently of the Temporary Physical Body.
***
The X-Structure and The Reality-Consciousness Transformation Process (X-RCT Process): A Bidirectional Manifestation-Perception Process from Unmanifested Initial Reality into Manifested Objective Reality (manifestation) and the Experience of it as Subjective Reality – Life Experience/Consciousness (perception).
– A Greater Reality –
PDF-version >> 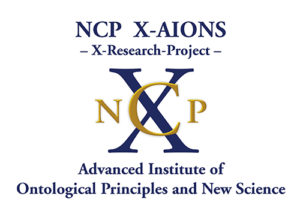 The Cosmic Worldview presents a New Ontology, in fact – a New Paradigm, which replaces the old materialistic worldview where chance and coincidence govern, with a new, comprehensive world-picture illustrating a living, multidimensional, infinite Multiverse, and where life is controlled and governed by an all-embracing consciousness in harmony with eternal creative principles and precise laws of nature. All living entities are immortal “life-units”, linked together and parts of this living and conscious Cosmos. A novel evolutionary perspective is also presented describing a constant renewal and development for all living beings – an eternal evolution of consciousness at all levels.

The Cosmic Worldview is based on the knowledge conveyed by the Danish intuitive philosopher Martinus Thomsen (1890-1981), systematized and further developed by his former trainee and collaborator Per Bruus-Jensen. New Cosmic Paradigm – NCP X-AIONS is representing the Cosmic Worldview and the branch of Martinus Cosmology that is building bridges to Science. This branch is especially represented by the work and literature of Per Bruus-Jensen and The X-Research Project by NCP X-AIONS.

Below follows a short summary describing extremely brief just a few of the Cosmic Worldview’s leading, load-bearing themes and fundamentals.

1. Our Eternal Constitution and How we Survive “Death”. Very briefly, this is made possible by our paraphysical organism/ body. According to The Cosmic Worldview all living beings have, in addition to the temporary physical body, an immortal paraphysical body/ structure, which the physical body is connected to and completely dependent on. We are given an account of how this paraphysical body is constructed and how it operates, e.g., how the so-called “ability-nucs”/ “talent cores”, among other things, make it possible for us to take qualities, abilities and skills with us from life to life. The talent cores and their functions are prerequisites for the development of all forms of life and evolutionary processes. It should be pointed out that the ability-nucs are highly relevant in the field of epigenetics as they directly exert an influence on the genes of the DNA-spiral. Also explained is how life continues in a paraphysical sphere of existence after physical death and the course of events which leads to a new incarnation.

2. Consciousness, Experience, Perception, Qualia – What Consciousness de facto is and How all Experience of life takes place, including a solution to the Hard Problem of Consciousness – the problem of experience; how and why we have qualia or phenomenal experiences. The paraphysical structures and their processes are highlighted which, side by side with the activities of the physical brain, constitute the foundation of our ability to experience, to remember, think, feel, etc. – in fact, of all activity in our consciousness. Viewed as organic factors, these paraphysical structures precede the physical body and can accordingly operate independently of it. As such, they contribute to ensuring the process of reincarnation or body-replacement, and thereby the individual’s ongoing course of personal evolution.

3. What our “I” and our Soul de facto are, as well as how the central “power generator”, with its output of life force, is constituted and functions, and how it is the driver responsible for all of the human being’s mental activity; as such, it also presents a basic explanatory model for the human psychology in its entirety.

4. How we can Influence our Future and our Fate, by highlighting the interaction of so-called free will with the natural laws and regularity prevailing in existence. Intrinsic insight is provided concerning the link between cause and effect, between initiatives and consequences.

5. How we Develop through a Spirally-formed Evolution. Life takes the shape of an eternal rhythmic evolution, a constant renewal and development for absolutely all living beings. This takes place in the form of an expanding cosmic spiral gradually leading towards ever higher forms of life. Every spiral turn includes six fundamentally different planes of existence (corresponding to the Cosmos’ six main fields of consciousness) which all living beings in ever new ways wander through. The ongoing result of this spirally-formed evolution is an everlastingly renewed experience of life – an eternal evolution of consciousness.

6. All Living Beings are Immortal Life-Units in an All-Embracing Life-Unity; an infinite, multidimensional Multiverse beyond time and space, a living, conscious Cosmos. “Nonduality”, we are “all one”, (many people of today have so-called “spontaneous cosmic glimpses” including experiences of oneness), the complementarity of wholeness/ oneness and duality/ separation, and also “the Structure of Entanglement” are described …

7. The X-Structure; the Basic Nature of Life, Consciousness and Reality. Reality fundamentally is immaterial emptiness and stillness. (As this primordial form is unknown by man, Martinus expressed it and the nature and structure of life and reality by the letter “X”.) The X-structure constitutes the very basic nature of Life, Consciousness and Reality. This fundamental X-structure is in principle the same for everything that exists, has existed and will exist. The X-structure is activating and transforming the emptiness and stillness into energy, force, movement, matter and life-experience/ consciousness.
The primordial domain of existence “X0” is an all-embracing, unmanifested world of emptiness and stillness, containing infinite potential of creative possibilities. The X0-nature is continuously generating an indivisible, integrated, Triune Operating Principle “X” with three functional aspects:

X1 – the Creating and Experiencing Something (the subject/ the “I”) – emptiness, stillness.
X2 – this Something’s Creative and Experiential Ability – energy (qualitative cosmic basic energies).
X3 – the Created and Experienced, i.e. X3 = the result of the interaction between the I/ the Subject (X1) and its Creative/Experiential Ability (X2) represented by movement including the material illusion as objective reality (X3 obj.) on one side – and – the experience of it as subjective reality/ consciousness (X3 subj.) on the other. X3 = energy conversion: X3 obj. = movement, X3 subj. = experience of movement, qualia.

The X-Structure also demonstrates the seven extremely subtle qualitative “Cosmic Basic Energies” or “Fundamental Energies” with specific characteristics. These basic energies build up everything in life and existence – from the most subtle, e.g. our thoughts, feelings, memories, etc. to the very densest e.g. physical matter, black holes, etc. One of the basic energies, the primary fundamental energy, operates via a number of so-called “Cosmic Creative Principles”/ “Morphogenetic Effect Constants”; formative principles and form-creating forces that sustain and organize life and reality. We can empirically observe the effects of these morphogenetic effect constants in the laws of nature with their extremely delicate precision etc. Creation involves conversion of energy and manifests itself as movement – the five universal classes of motion: 1.the Primordial motion (implies a positional motion “from A to B”) and the four so-called “derived motions” in our physical world known as 2.Space, 3.Time, 4.Transformation/ change, 5.Matter. Motion is the most distinctive feature of life – movement is life in a demonstration. Note that all motions of the Multiverse neutralize each other, confirming the all-embracing X0-nature of emptiness and stillness.

8. The Nature of Energy and Matter. From physics we know that subatomic particles constitute the tiniest part of matter, and that an apparently omnipresent void (99,999…9%) is dominant throughout, i.e. almost 100% is just emptiness. Physicists speak of it as the vacuum/ zero-point field and they have realized that it is actually not empty, but holds unbelievable concentrations of very subtle energy – the so-called vacuum or zero-point energy – without knowing what it is. The Cosmic Worldview describes the mentioned energies as the seven Fundamental Energies (see paragraph 7 above), each holding a specific quality – which is an original and novel concept. These qualitative energies also have different impacts and strengths and they build up Everything in Life and Existence from the very densest physical matter, to the most subtle that exists including our own consciousness and mental life comprising thoughts, feelings, memories, etc. In the Cosmic Worldview the Fundamental energies are described in detail in the topic termed “Cosmic Chemistry”.
It also describes how the fundamental energies in the zero-point/ vacuum field constitute particles and matter, how particles actually are identical to these energies, although in a condensed form. In other words particles are just densified energy. Einstein’s famous formula, E = mc² is expanded to X2 = mc², followed by a clarification of the energy concept which is shown to be immaterial at its roots.

9. The Theory of Everything and The Fundamental Energy Theory – FET. Physicists have worked intensively for a long time to understand our physical world. They have also been struggling to unify the four forces of nature: gravity, electromagnetism and the strong and weak nuclear forces into what they term “The Theory of Everything”, but so far without success. NCP X-AIONS presents (2012) Leif Pettersson´s groundbreaking and very exciting material demonstrating a new model, “The Fundamental Energy Theory – FET”, that without any contradiction unifies the four fundamental forces of nature, and in fact gives us “The Theory of Everything”. One part of FET is primarily focusing on two of the qualitative fundamental energies, the Expansion and Contraction energies and how they are underlying and constituting the entire physical world, the other fundamental energies are also involved in these processes but to a much lesser degree. The expansion and contraction energies have totally opposite characteristics, i.e. there is a tension between them. FET states that the interaction and tension between these two energies constitute the very basis of what physicists call force, particles and matter. The theory describes and explains the enigmatic dark matter and dark energy, the creation of particles from the zero-point field that in turn elucidates the phenomena of mass (Higgs field), curved space, the mechanisms of gravity and much more. (Information about the book:  “Physics, Martinus Cosmology and The Theory of Everything – The Fundamental Energy Theory – FET”.

“The X-Structure”; The Basic Nature of Life and Reality. The X-Structure operates via “The Reality-Consciousness Transformation Process” (the X-RCT Process); The Bidirectional Manifestation-Perception Transformation Process from Unmanifested Initial Reality into Manifested Objective Reality (manifestation) and the experience of it as Subjective Reality – Life-Experience/ Consciousness (perception).

The Ontology of The Cosmic Worldview – Introduction

Top of page
Scroll to top