The X-Structure; the Nature of Life, Consciousness and Reality – and – The X-RCT Process; the Reality-Consciousness Transformation Process

See also: Additional Information X0 and X1,  Supplementary sections 8 and 9. and The X-Structure – the Living Being and the Organism

The X-Structure – the basic Nature of Life and Reality, as this primordial form is unknown to man, Martinus expressed it with the letter X, also termed the “living Something”, the “living Being”. The X-structure constitutes the ultimate foundation and prerequisite for Life, Consciousness and Reality; for everything that exists, has existed and will exist. The X-structure is in principle the same for all forms of life including the infinite and all-embracing Cosmos, and its main function is the continuous creation of consciousness/ experience. The X-structure is immortal, organic and holistic.

The Initial Reality – X0 (the primordial domain of existence) is an all-embracing, immaterial, unmanifested world of emptiness and stillness; a world which, in “virtual” form, contains infinite creative possibilities/ creative potentials thereby constituting the initial reality; the absolute and comprehensive foundation and origin of everything. Here prevails emptiness, stillness, wholeness, eternity and infinity; a state of total nonduality and nonlocality.

X0 is permeated and influenced by a spontaneous and continuous need for self-knowledge (to perceive and experience itself, to manifest itself), termed the central need. The central need constitutes a need for contrast to the unmanifested X0-nature; a need to convert and transform itself into manifested form by using the infinite potential of creative possibilities (creative potentials). In other words; the conversion of the ”virtual” creative possibilities in X0 into manifested form results in a “Something” that is capable of self-experience and self-affirmation – a “Something” with the ability and will to perceive and experience itself. The central need is “supported” by the creative possibilities (creative potentials), which, by their nature, continuously and spontaneously appeal to their own conversion into manifested form, (fig. 1).
The “first”, and continuous effect of the central need is the generating of a motivating and determining will, termed the primordial urge, taking advantage of the potential creative possibilities (creative potentials) in order to create a contrast to the X0-nature of emptiness and stillness, (fig. 2).
The direct and constant result of this conversion process via the central need and the primordial urge, is the continuous initiation and activation of an indivisible, fundamental principle termed the Triplementary Principle X* with three integrated functional aspects X1, X2, X3 that characterize all of life. (fig. 3) 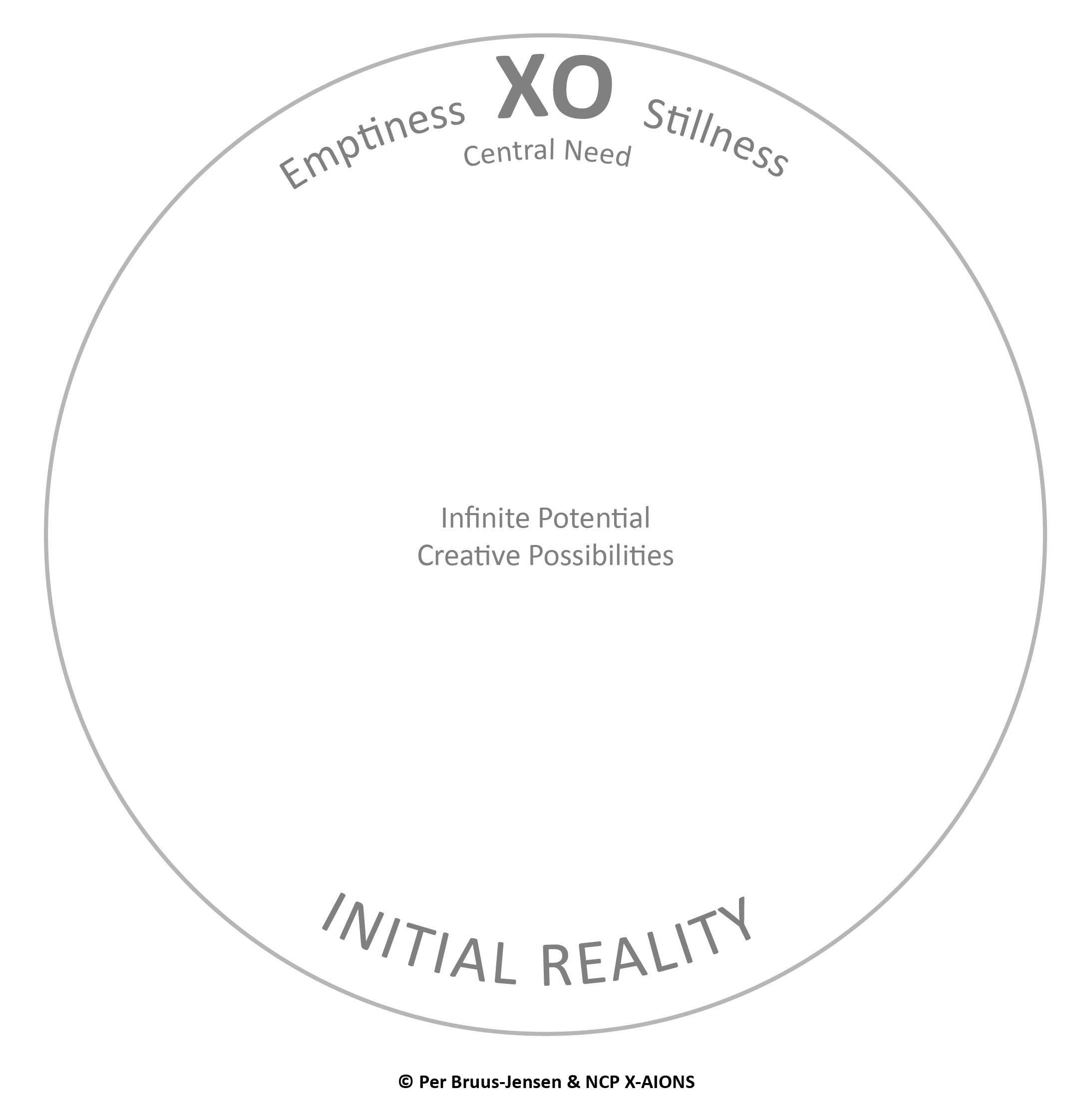 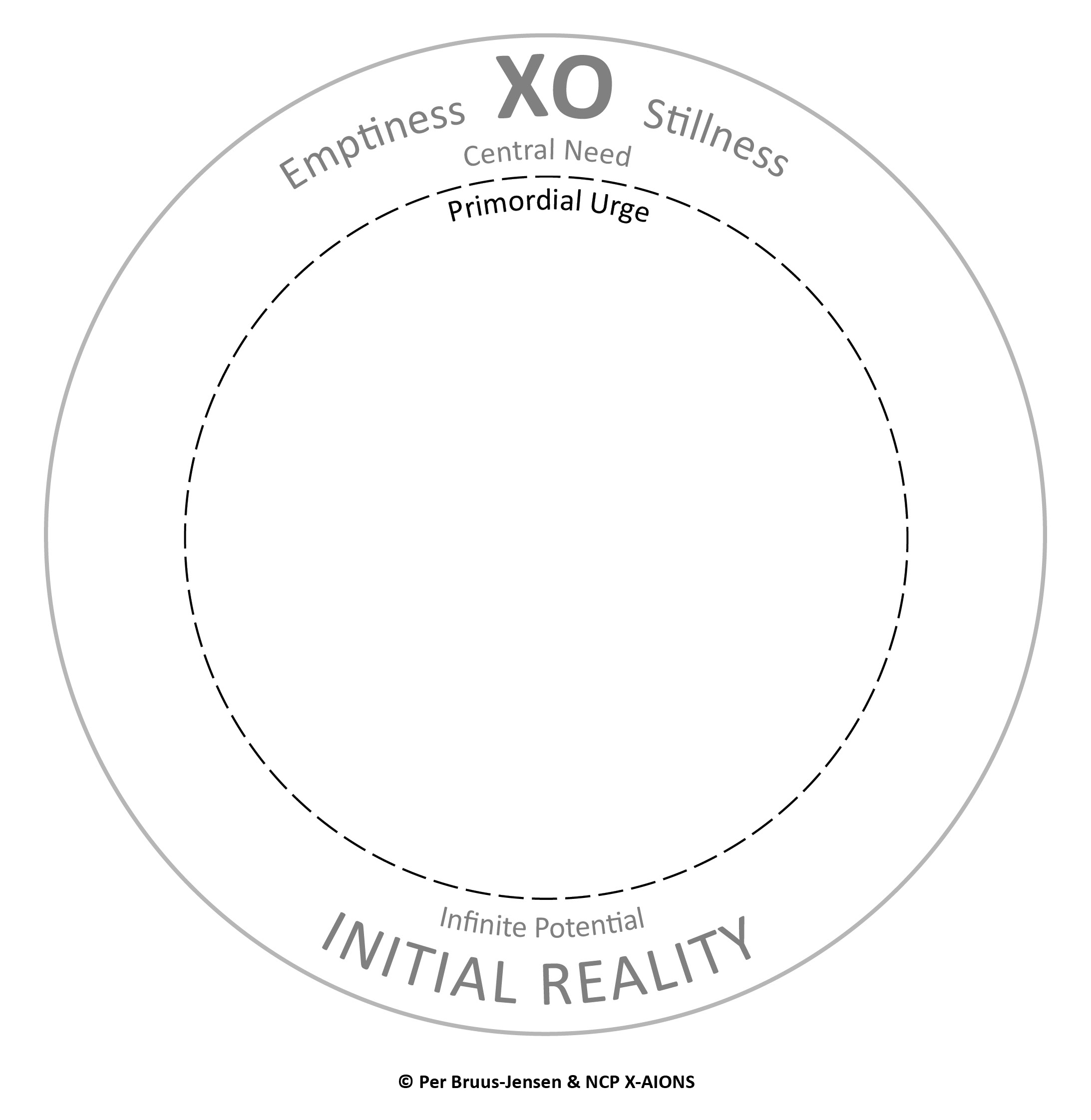 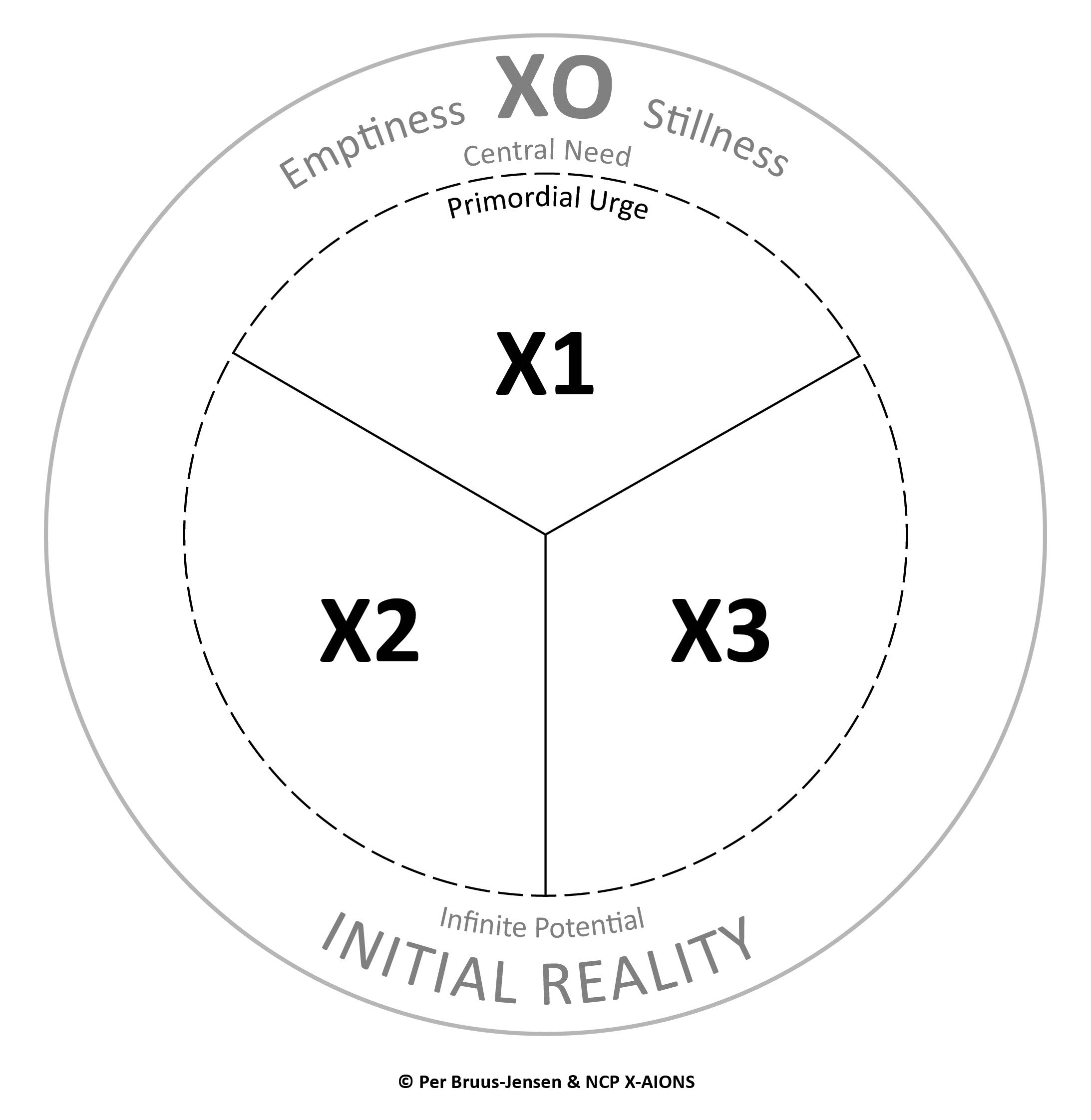 Note!  the Triplementary Principle (Triune Operating Principle) is indivisible, the three integrated functional aspects (X1, X2, X3) operating and functioning as a whole. All forms of division should therefore be seen as “theoretical analysis-illustrations” aiming to facilitate the understanding of the triplementary principle and the X-structure. 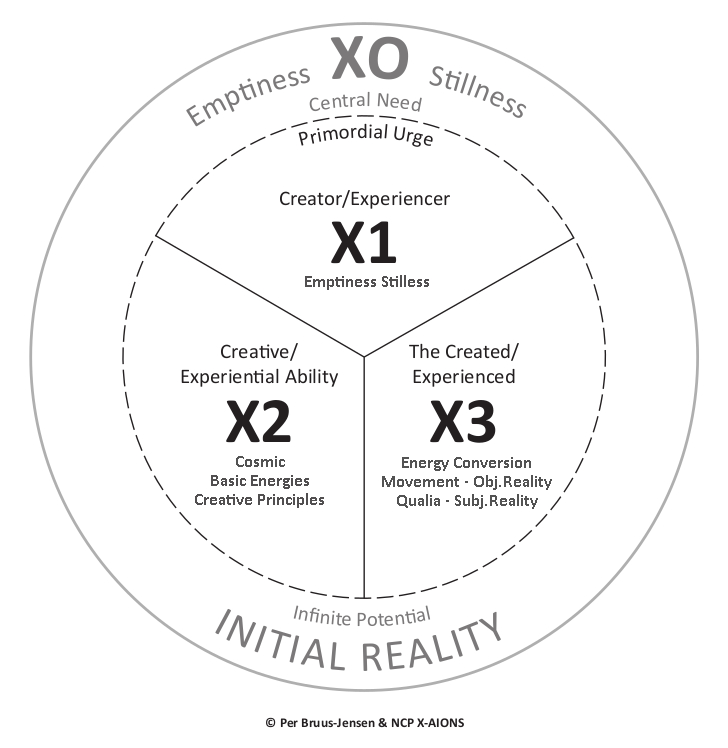 X1 – the Creating and Experiencing Something (the Creator and Experiencer) – the Subject/ the “I” (the “bearer of consciousness”, the timeless ”central point” we term and refer to as ”I”).
Emptiness, Stillness

X3 – this Something’s Created and Experienced Reality (the Created and Experienced) – X3 is the result of the interaction between the Subject/ the “I” (X1) and its Creative and Experiential Ability (X2), represented by movement including the “material illusion” as objective reality (X3 obj.) on one side, and the experience of it as subjective reality (X3 subj.) on the other.
I.e. objective and subjective effects: movement, the “material illusion”, the manifested Cosmos (obj. reality) – and – the experience of it as qualia (subj. reality); the ”subjective reality complex”.
Energy Conversion, Movement  (X3 = energy conversion:  X3 obj. = movement, X3 subj. = experience of movement; qualia.*)

* X3 subj: subjective reality = experience of objective reality; all forms of experience, consciousness, awareness, qualia (often expressed as “life-experience” by Martinus and Per Bruus-Jensen), knowledge of something’s being including its own, awareness of internal and external existence.

The primordial urge functions as an “extension” of the central need, and is spontaneously linked to X1 and implies subjective status, i.e. X1 is the subject; the creator and experiencer (the timeless ”central point” we term and refer to as ”I”). X1, like the X0 nature, is characterized by emptiness and stillness (X0 and X1 are both symbolized by white). However, X1 has subjective status and its function is to provide the X0-nature (the initial “Something”) with a way of operating, that implies a double function: partly as creator (manifestation function) and partly as experiencer of the created (perception function) and thus, the X0 nature’s central need to experience and perceive itself, to manifest itself, is fulfilled.
To paraphrase: Using the potential creative possibilities in X0 via the central need and the primordial urge results in a conversion of the initial unmanifested “Something” into a manifested creative and experiential “Something”, which happens constantly and spontaneously via the triplementary principle X (driven by the central need and the primordial urge) as follows:

The function and effect of the X-Structure and its Triplementary Principle are summarized in the Reality-Consciousness Transformation Process – the X-RCT Process, (see below, X-RCT Process).

(The Symbol Xom3; The X-Structure – the Living Being and the Organism (overview), follows below the X-RCT Process.)

The X-RCT Process – the Reality-Consciousness Transformation Process
This section is a direct continuation of the “X-Structure”, see above

The X-Structure – the Living Being and the Organism (Xom3) – Overview

You will find an introduction on the following page: Overview – Symbol/Diagram The X-Structure; The Living Being and The Organism.

We also refer to:
Clarification regarding the complementary designation X2/X3
Supplementary, section 6

This elementary overview presents only the different main levels including some of the special terms given by Martinus and/or Per Bruus-Jensen, the presentation does not include details.

(a) X0 the Initial Reality with its Central Need/CN and Infinite Potential – the primordial domain of existence, the ”unmanifested”, (emptiness, stillness), (white).

(b) X1 the Subject/ the “I” with its initiating and driving Primordial Urge/PU – the eternal (emptiness, stillness), (white).

(d) X2/X3 the Element of Fate, the two circles with + and – symbolize the Poles for receiving and sending of energy, also termed the Feminine Pole and the Masculine Pole. The Feminine Pole +function: the receiving of energy, perception, and the Masculine Pole -function: the sending of energy, manifestation. These Poles are connected to the two Pole Organs in area e.
The six open and colored circles with downward pointing rays symbolize the six Spiral Centers/ Basic Talent Cores (or Kernels), constituting the six Basic/ Working Energy Centers of Force; the Center of Instinct Energy (red), the Center of Expansion/ Action Energy (orange), the Center of Contraction/ Perception/ Feeling Energy (yellow), the Center of Intelligence Energy (green), the Center of Intuition Energy (blue), the Center of Memory Energy (light indigo).
It is via the six Spiral Centres/ Basic Talent Cores that the Mother Energy is split, divided and converted into the six Basic/ Working Energies, (i.e. the so-called “Split of the Mother Energy”; the law-governed structured flow of the six Basic Energies into different specific combinations).
All the individual’s Talent Cores/Kernels (Ability-Nucs) are situated in the Element of Fate: The Memory-Talent Cores constitute the Perception Archive and are integrated primarily with the Spiral Center/ Basic Talent Core of Memory Energy (the Center of Memory Energy). The Manual Activity-Organ-Talent Cores and the Autonomous Organ-Talent Cores are integrated with different Spiral Centers/ Basic Talent Cores depending on their respective functions.
The talent cores form and continuously develop a unique individual Paragenetic Force Field which is of great importance for each reincarnation process the individual undergoes.

Note: Areas c and d are in principle the same for all life-units/ forms of life with the exception of the following which are individual: 1. the memory-talent cores, 2. the manual activity-organ-talent cores, 3. the autonomous organ-talent cores, 4. the perception archive and 5. the paragenetic force field. These (1-5) in interaction with the cosmic creative principles are crucial for individuality in areas e-i; the soul structure, the semiphysical switching body, the physical body, the created, the experienced and consciousness.

(f) X2/X3 the temporary Switching Body (grey) functions as a transition and transformation zone and organic link between the temporary Physical Body and the paraphysical Eternal Body.

(g) X2/X3 the temporary Physical Body, symbolized by the most dominant Basic Energies in physical organisms (orange and yellow), – and in the Physical Planes of Existence, we know as the Mineral Kingdom (indigo), the Plant Kingdom (red), the Animal Kingdom which includes humans at the current stage of development (orange) and also the very early stage of the Human Kingdom (fully developed human beings, “real humans” – yellow).

The Created and Experienced – Objective and Subjective Reality (h-i)