Brief Introduction – Overview
Martinus presents a completely new concept of energy; the seven extremely subtle, qualitative “Basic Energies”, (also termed the “fundamental energies”). Everything created in life and reality consists of these qualitative basic energies – everything from the very densest physical matter to the most subtle that exists including our thoughts, feelings, memories, etc. In fact, the infinite manifested Cosmos consists of different combinations of these qualitative basic energies.  In order to illustrate the specific qualities, impacts, and strengths of the basic energies, Martinus gave them different signature colors and numbers, etc. that he consistently used in his symbols. Martinus named the different basic energies according to how their respective characteristics and qualities appear in the physical world we know and experience, as well as their presence and activity in our bodies and in our consciousness. It should be emphasized that the basic/ fundamental energies never appear separately but always operate together in different combinations, Martinus terms this topic “Cosmic Chemistry”, (see “Begrebet Kosmisk Kemi”, (in Danish) Per Bruus-Jensen). When you know these qualitative basic energies you will recognize them in everything and everywhere.

Below follows a short presentation and classification of the seven basic energies, including name of energy, signature color and number illustrating relative strength of impact, and a very brief description summarizing the characteristics of the energy along with some of the instances in which the described energy dominates.

Expansion/ Action energy (orange, impact factor 40), (in some English translations also known as “Gravity energy”, which is an earlier and unfortunately misleading term): expansion, action, dynamism, manifestation, acting outwards, explosion, acceleration, heat, the main component of physical matter, “mass-function”; responsible for what we term mass and the Higgs field*.
In consciousness, this energy is emotionally expressed as aggressiveness, ruthlessness, egoism, destructive actions, cruelty, even to harm and kill living beings.

The opposite qualities of the Expansion/ Action energy are found in:

*Additional information about the Expansion/ Action energy EAE and the Contraction/ Perception energy CPE: The interaction and tension between these two opposing (“antagonistic”) energies constitute the very basis of what physicists term force, particles and matter. In brief: The dynamic EAE (under the influence of CPE) is the main component of physical matter and thus responsible for what we call mass and the Higgs field. Physical matter is generated as a result of the tension between EAE and CPE. Physical matter consists of EAE (“mass-function”) condensed by CPE (“gravity-function”). In this context, we refer to “Physics, Martinus Cosmology and The Theory of Everything – The Fundamental Energy Theory – FET”, by Leif Pettersson (New Cosmic Paradigm NCP X-AIONS). 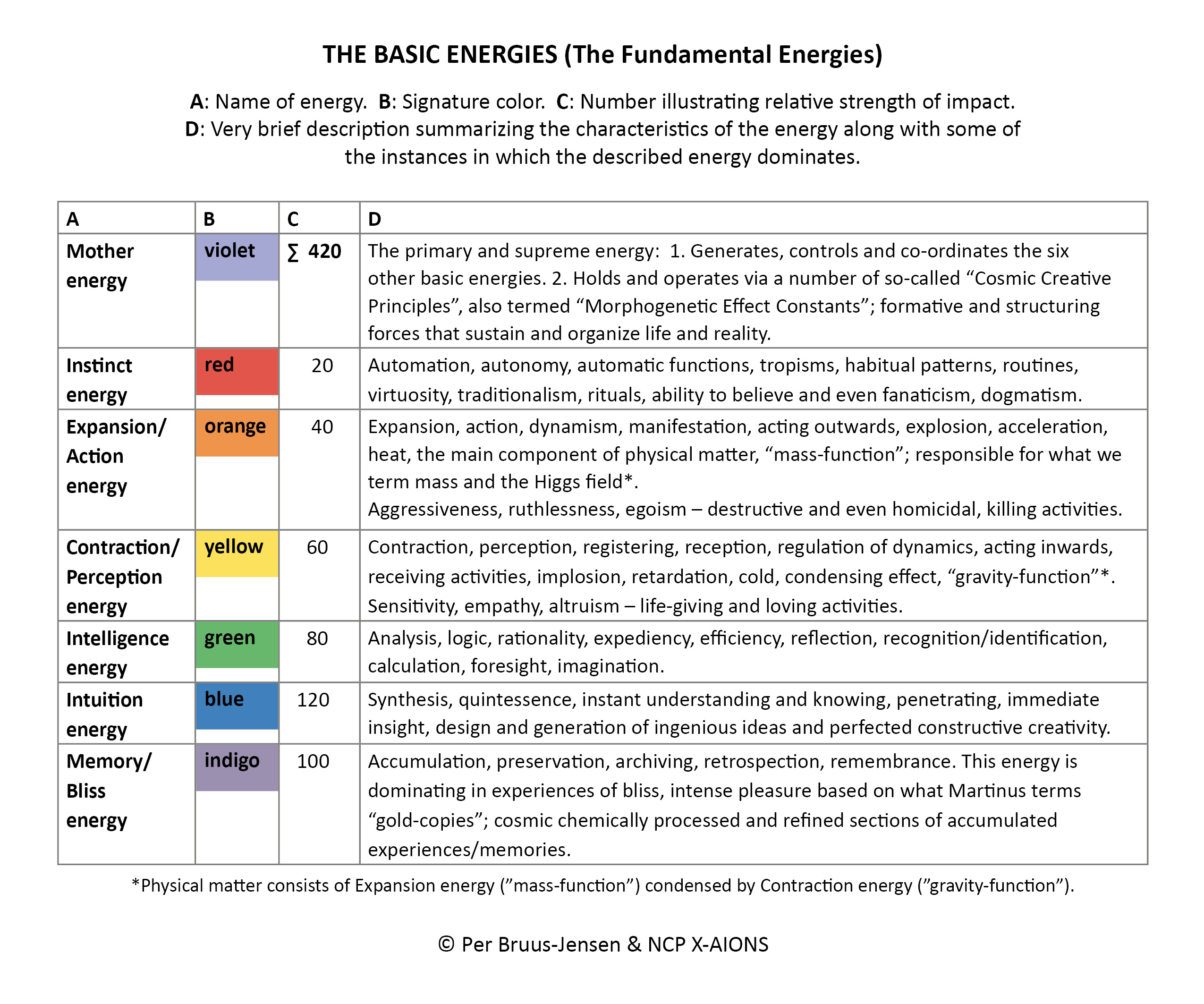