Toward a Science of Consciousness – TSC 2011

A brief summary of The International Conference
‘Toward a Science of Consciousness – TSC’
University of Arizona and University of Stockholm, May 2-7, 2011.
– Therner & Loeth –

To view the conference program, presentation of lecturers, abstracts, images etc. go to: TSC Stockholm 2011 ( arranged by The University of Arizona www.consciousness.arizona.edu)

In brief: It was inspiring! We met with researchers, lecturers and participants from the whole world (65 nationalities were represented) and there were many inspiring encounters with e.g. Peter Fenwick, Lothar Schäfer, Tarja Kallio-Tamminen, Deepak Chopra, Stuart Hameroff, Christer Perfjell, just to mention a few. 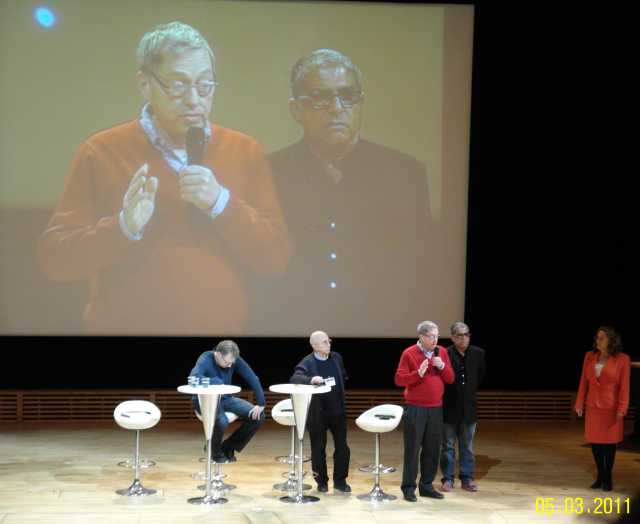 The TSC conference indeed showed that we are facing, or already find ourselves within, a paradigm shift. There were lectures and discussions about our entire crumbling world view and defective understanding of reality with comprehensive issues such as the nature of consciousness, whether the universe is conscious and whether Science and Spirituality* can be united, notions about ‘the I’ and our life experience and also the nature of energy and matter – and a lot more! Our present perception of reality was illustrated with examples from medicine, biology, chemistry, astrophysics, particle physics, philosophy etc. – and using many connections between science and spirituality. Much detail was brought forward that related to fragments of Martinus’ world view but this was not as structured, detailed and above all not as extensive as his work. We established that the work of Martinus and Per Bruus-Jensens/PBJ includes many of the crucial ‘pieces of the puzzle’ which modern science lacks and is intensively searching for.
*We define Spirituality as ‘expanding consciousness and intuitive/inner knowledge’.

In our view we observed the lack of our own material in English! It was however very interesting and instructive to participate as audience. We also had the opportunity to create important contacts through individual conversations with several of the speakers. We have received an invitation to participate at the next TSC conference in U.S.A., Arizona University (April 2012). In the meantime we are endeavoring to compile informative material in English for this event. At the conference we will also have an opportunity to present Leif Pettersson’s book ‘Physics, Martinus Cosmology and the Theory of Everything‘. It should be emphasized that PBJ’s books are very much needed in English translation and in this we are facing a great challenge!

This year’s conference focused among other things on neurobiology and as Alex Riel points out in this context: although there is a lot of molecular activity recorded on the brain cell level that can be coupled to consiousness, there are also more and more research results indicating that the direct interaction inbetween consciousness and the brain as well as the body occurs on an electrical level and through quantum processes. This is also interesting since mystics, who claim that they have actually experienced what consciousness is, believe that consiousness is a primary quality in the universe that interacts exactly with the brain and the body via a finetuned electric energy at the quantum level.

Many lecturers were obviously open to what we refer to as ‘A Greater Reality’ (including a paraphysical existence and reality, a conscious universe, reincarnation etc.) A few very materialistic presenters contributed to many lively exchanges. Some of the discussions concerning ‘randomness and the materialistic view’ prompted many intelligent and elegant inputs. Here is an example: ‘Sure, music is just vibrations – but there has to be an instrument, somebody playing, somebody who has composed the music and somebody who listens…’.
There were overall many similar beautiful connections and you could almost believe that a few of them had actually read some of Per Bruus Jensen´s books!

A Few HIGH-LIGHTS of The CONFERENCE: 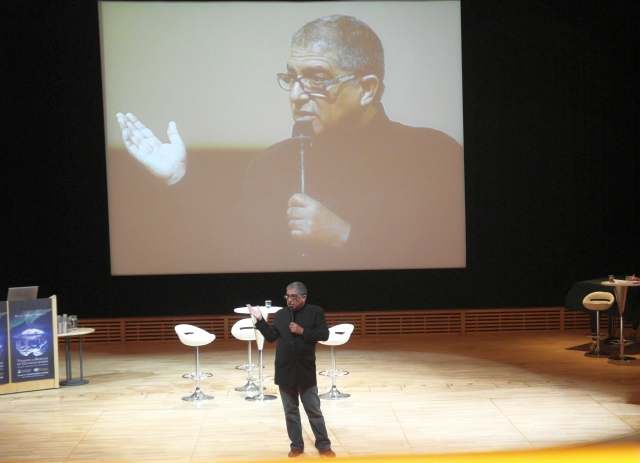 Like us many probably experienced Deepak Chopra as a great personality, he showed deep knowledge and insight and made many interesting connections to the latest within physics, biology and medicine, e.g. to Elisabeth Blackburn’s (Nobel Prize Laureate 2009 in Medicine, DNA-research) latest research. Also presented were research results that point to the positive effects of meditation. The crucial importance and influence that our thoughts have on our lives and our well being was also covered. In this we found striking parallels to what Martinus pointed out about ‘thought climates’ and their significance to us. 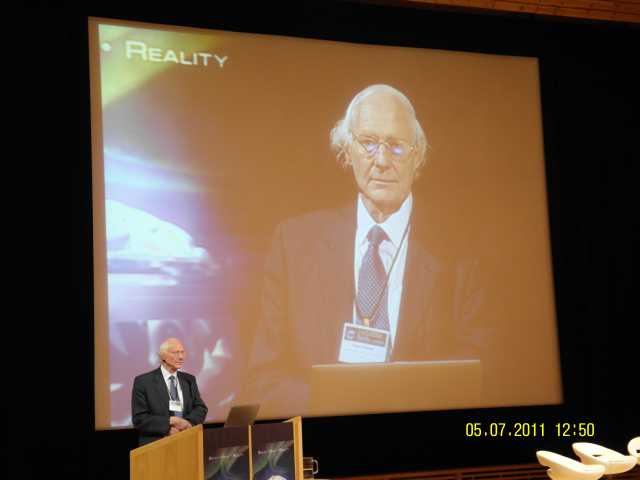 Death research) held a short speech at the opening of the conference and a longer more expansive lecture as the final speaker in the main conference. This framed the proceedings in an amazingly beautiful way using a theme of ‘Death and Dying’ which clearly touched most people in the audience. Peter Fenwick shed light upon this subject based on his extensive research studies comprising of 1500 people in England, Ireland and Holland. This and his other research is, as we see it, impressive evidence that we ‘survive’ death *). In this context we observed a need for Martinus Cosmology and Per Bruus-Jensen´s work which describes ‘how it all happens and works’- i.e. how we survive death through our paraphysical organism/structure, and the way it is constructed. Also how the so-called ‘ability-nucs’/talent cores among other things make it possible for us to take qualities, abilities and skills with us from life to life (which are a pre-requisite for our development) and how life continues in a paraphysical existence/ sphere of existence after the physical death and the course of events which leads to a new incarnation, a new physcisal life.

Link to Peter Fenwick’s lecture at TSC, University of Stockholm 2011: Toward a science for death related phenomenon and consciousness, and to The Art of Dying, (by Peter & Elizabeth Fenwick).
In this context we can take the opportunity to refer to Youtube ‘Reincarnation of James’ which our collaboration partner Alex Riel (founder of Center for Noetisk Livsfilosofi and Metamening in Denmark) recommended during his comprehensive talk in Stockholm April 30, 2011, on the theme of ‘Cosmic Psychology’. The film is available as a book ‘Soul Survivor’ (by Bruce & Andrea Leininger 2009) and recalls a child’s well documented and verified memories from an earlier life.

*) We warmly rekommend: Fenwick, Peter & Elizabeth: The Art of Dying – Continuum (2008), Past Lives: An Investigation into Reincarnation Memories – Berkly (2001) og The Truth in the Light: An Investigation of over 300 Near-death Experiences – Berkly Trade (1997). See also IANDS International Association for Near-Death Studies and Information brochures by Peter Fenwick and Sue Brayne: Nearing the End of Life – A Guide for Relatives and Friends of the Dying and End-of-Life Experiences – A Guide for Carers of the Dying. 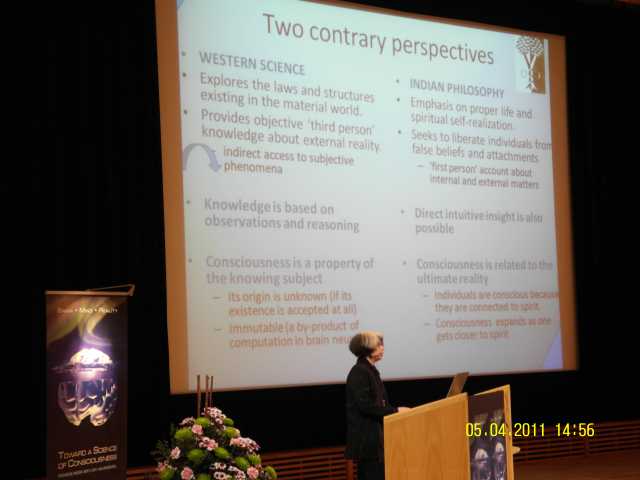 Tarja Kallio-Tamminen (Theoretical Philosophy and High Energy Physics) presented a very interesting lecture called ‘Quantum Physics and Eastern Philosophy’. Hugely thought provoking material, it spanned a wide area and illustrated the necessity of a new paradigm to be able to understand our existence and ourselves as well as creating a sustainable society. Tarja Kallio-Tamminen drew on her deep knowledge in quantum physics and Eastern meditative traditions, emphasizing her conclusion that there are no contradictions between Science/ traditional knowledge and Spirituality/ intuitive knowing, inner knowledge – on the contrary they are compatible aspects and tools in our exploration of reality. 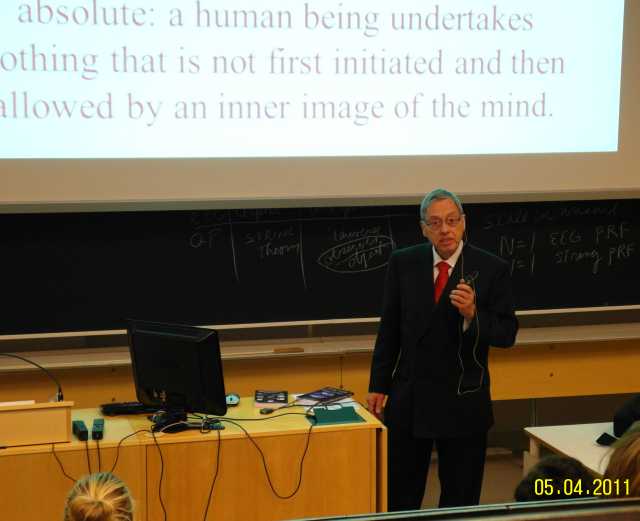 spontaneous, valuable, important and thought provoking contributions. He also offered an intriguing talk: ‘Can trans-material and trans-empirical theories of consciousness be scientific?’ which amongst other things high-lighted that the foundation of the material world is immaterial: ‘In contrast to the world view of Classical Physics, the basis of the material world is non-material, and a trans-empirical domain of reality exists, which consists of invisible forms, which are real, because they can act in the empirical world’. This and more wholly being in accordance with Martinus Cosmology and PBJ’s work. 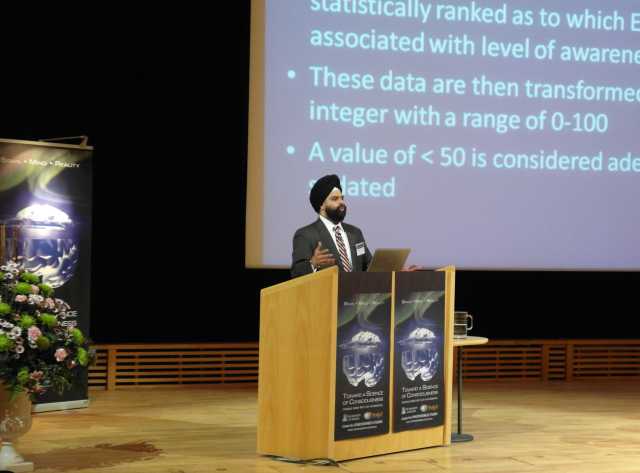 Lakhmir S. Chawla (Anesthesiology, Critical Care Medicine) presented in his lecture, ‘Surges of Electroencephalogram Activity at the Time of Death’, results of his comprehensive investigations that clearly show that ‘something happens even though the heart has stopped’ – quote from Agneta Lagercrantz, journalist at the daily newspaper, Svenska Dagbladet. To be more precise: after the heart has stopped beating and the brain activity has dropped to zero according to the EEG, a transitory peak of brain activity, verified by a very clear EEG-deflection/signal, suddenly occurs amongst a majority of people (80-85%). The signal ranges in frequency approx. 60-100Hz and it lasts for about 30 seconds to several minutes. This discovery rises many questions around the definition of the concept of death and also regarding the timing of what we refer to as ‘death’. It also complicates and raises new questions around the issue of organ donation, moving towards the view held by Martinus. Moreover, this finding has raised another issue that Alex Riel has mentioned in this context, namely whether or not the occurrence of this activity peak marks the time-point when the consciousness leaves the physical body and converts to a different plane of existence where experience takes place via a paraphysical body/structure (as described by many so-called mystics and people who have had near-death experiences NDE).

Stuart Hameroff (Anesthesiology and Psychology) is leader of the 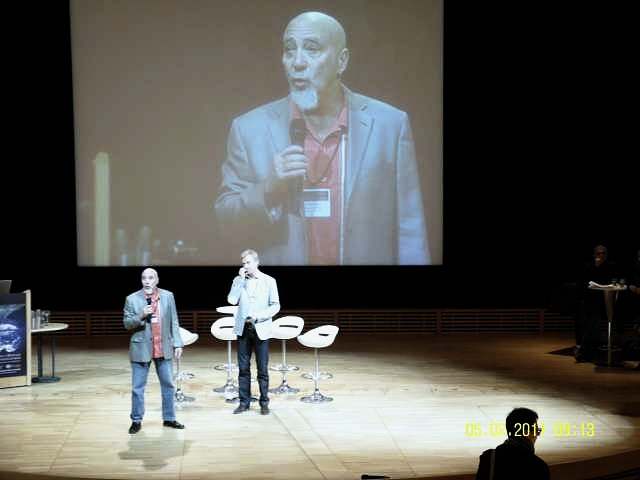 Center of Consciousness Studies – CCS at University of Arizona and initiator and organizer of the entire series of conferences “Toward a Science of Consciousness TSC”. He is a real enthusiast and dedicated researcher of consciousness who together with Roger Penrose (Mathematics and Physcis, a world-wide authority on the nature of reality) shed light upon ‘micro tubili’ and has extensive theories about its significance for consciousness. Apart from referring you to the comprehensive work of Stuart Hameroff and Roger Penrose we wish to refer to Axel Riel’s book ‘Mystik og Videnskab’* which clearly and succinctly describes the aforementioned theories. There is a shorter presentation of the subject in his article ‘Bevidstheden bag tid og rum’*, which can be found under the NCP X-AIONS page ‘Articles’.

*Will be translated to English. 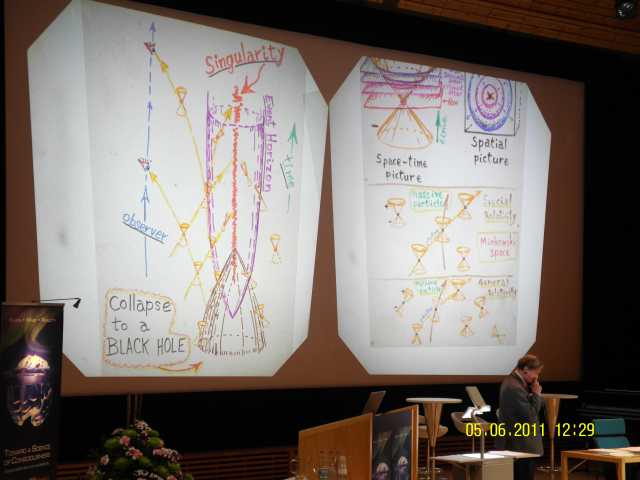 Roger Penrose also had an inspiring and entertaining lecture ‘Consciousness and Physical Law’ where he amongst other things presented his new theory that our universe is neither the first nor the last but on the contrary is part of an infinite process with recurring ‘Big-Bangs’ where one universe succeeds another. This new theory is launched in his book “Cycles of Time: An Extraordinary New View of the Universe” (2010).

Menas Kafatos (Physicist and writer on science) held an intriguing 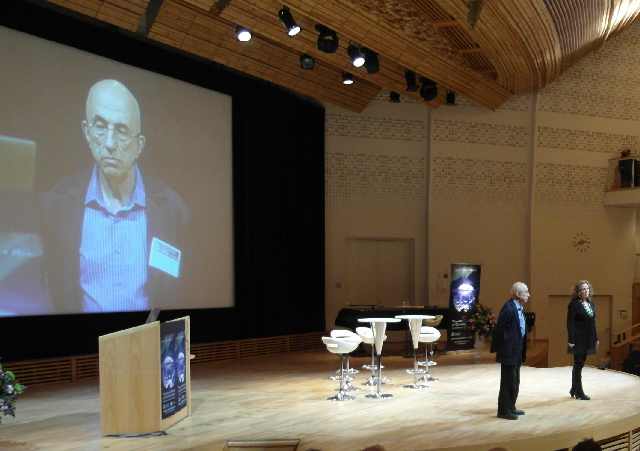 talk ‘Consciousness and the Universe: Non-local, Entangled, Probabilistic and Complementary Reality’. He made several original contributions that opened the imagination to a greater reality… He also illustrated the new paradigm from several differing views. ‘The new science of wholeness will be as scientific as the present one but it will be based on the fundamental role of consciousness in the universe’. (Author of ‘The Conscious Universe’ and ‘The Non-Local Universe’ and other works). 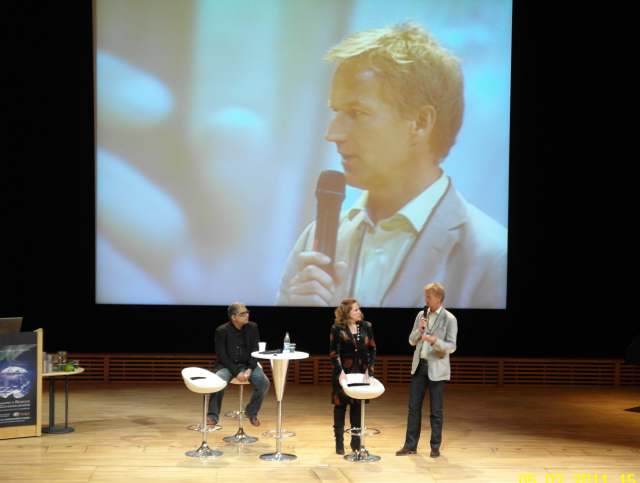 Christer Perfjell, initiator of this year’s TSC Conference to be held in Sweden, University of Stockholm. He talked about some of his own very special experiences that have influenced him greatly and that also have motivated him to organize the conference right here, in Sweden. We would like to take this opportunity and mention that Christer – following an accident – suddenly and unexpectedly had several out of body experiences (OBE) and gained a permanent ability to experience different levels/dimensions of existence. While he was searching for scientific explanations of the aforementioned experiences, he came into contact with Dean Radin, (researcher within parapsychology IONS), and Stuart Hameroff and other coworkers at The University of Arizona. We wish to express our gratitude to Christer for his immense achievement and the fullfillment of this years TSC conference in Stockholm.

A warm thank you also to Abi Montefiore at CCS University of Arizona, who has greatly contributed to this conference and for her direct support and encouragement to us regarding the NCP X-AIONS project. 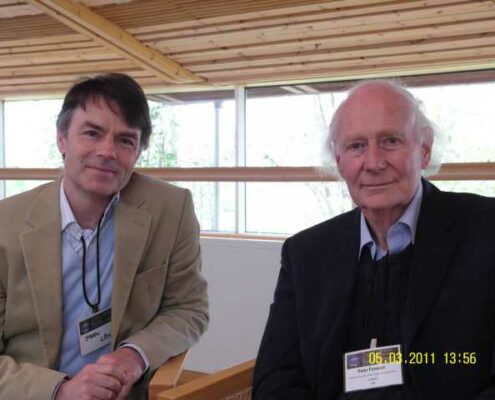 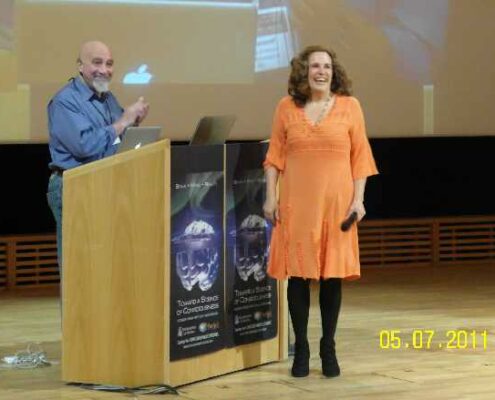 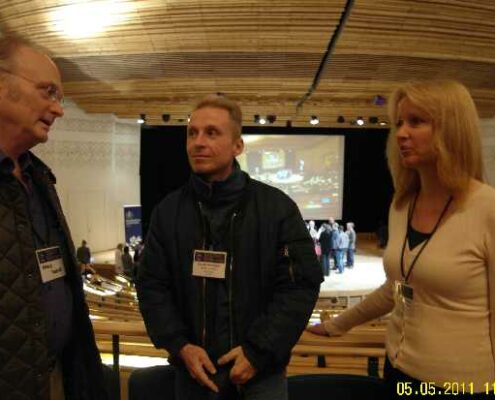 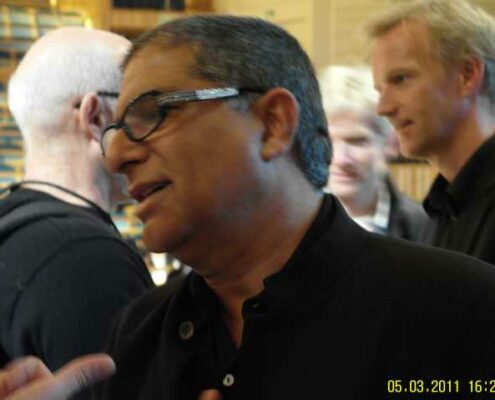